ALLEN Career Institute organized a grand honouring & mentoring ceremony to reward the nationally/ internationally acclaimed academically brilliant students from class 4-10 of the country on 25 August 2018, at UIT Auditorium, Kota and rewarded them with exciting prizes. On this special occasion, students were honoured along with their Parents for commemorating their contribution to the child’s development.

69 students of class 4 to 10 were given cash rewards of 41 lakh 58 thousand. The top 3 students from each class were given gold medal whereas other students were given silver medal along with champions trophy. In the event students of Allen Pre Nurture and Career Foundation Division were also awarded by ALLEN Pratibha Award.

National Rewards to ALLEN Champs along with their parents

Along with this student who secured up to rank 10 in each class were felicitated with cash prizes medal, Champion’s Trophy.

While addressing the people Sh Manpreet Singh Manna said that this is such a great platform to encourage and motivate the students. Such opportunities boost up the confidence of the students. It is highly appreciable that Allen is felicitating young talents of our nation. Directors of Allen Career Institute Sh. Govind Maheshwari, Sh Rajesh Maheshwari and Sh. Brajesh Maheshwari was also present in the event. 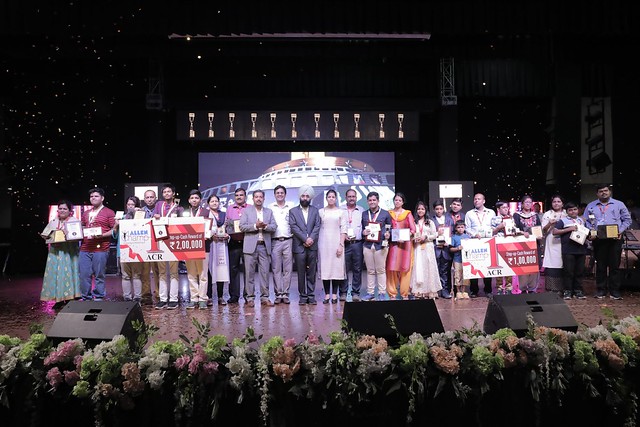 The famous Dance group MJ5 gave a mesmerising performance. Seeing their performance the entire auditorium was filled with great excitement. They performed on various Bollywood songs. Prahlad Acharya the famous Shadow Artist also showcased the art with his hands. He depicted different stories by the reflection of his hands.