JoSAA Seat Allotment 2018 Result for Round 3 has been declared online on 10 July 2018. The Round 3 Seat Allotment Result of JoSAA was scheduled to release earlier but it was temporarily suspended due to proceedings in the Hon’ble High Court of Madras. Candidates who have qualified in the entrance exam can now check the opening & closing rank list along with the JoSAA Seat Allotment Statistics 2018 on this page. JoSAA has released some new reporting centres for the benefit of the candidates. The JoSAA result for Round 1 was announced on 27 June 2018 by Joint Seat Allocation Authority (JoSAA). To check the JoSAA Seat Allotment 2018 result, the candidate can go to the link provided below. The candidate has to enter JEE Main Roll Number and password to log in and check the JoSAA Seat Allotment 2018 result.  The Result for JoSAA 2018 Seat Allotment is available online only and no hardcopy of mark sheet will be sent to the candidates. JoSAA 2018 Counselling was conducted after the JEE Main 2018 and JEE Advanced 2018 Result that was announced on 30 April 2018 and 10 June 2018 respectively. The candidates are required to pay the seat acceptance fee within the stipulated time period to continue to be a part of JoSAA 2018 counselling. JoSAA has released supernumerary seat for females. Indian Institutes of Technology (IITs) and Indian School of Mines (ISM) will offer admission to its various programs for the academic session 2018-19 on the basis of JEE Advanced 2018. There is no Home State Quota in IITs, unlike NITs & BIT Mesra. Admission in IITs is on the basis of JEE Advanced Rank 2018 and JoSAA 2018 Counselling.

National Institutes of Technology (NITs), Indian Institutes of Information Technology 9 IIITs) and a few other technical Institutes funded fully or partially by Central or a State Government  will offer admission to its various programs for the academic session 2018-19 on the basis of JEE Main 2018

Latest Update - JoSAA Seat Allotment Result for Round 3 has been released online on 10 July 2018.

JoSAA Seat Allotment 2018 result for Round 1 has been declared by Joint Seat Allocation Authority on 27 June 2018. There are a total of 34,895 total seats for candidates. Candidates have to choose and apply online to a series of academic programs in a certain order of priority. In the context of seat allocation, “academic program” refers to the combination of academic program and Institute. Following factors will be considered to allocate a seat to the highest possible choice of academic program

The JoSAA seat allotment schedule for the year 2018 is available. The counselling process will start after the declaration of JEE Advanced Result 2018.

At the time of accepting the seat, a candidate can opt for three options that are freeze, float or slide the choice of academic program for subsequent round(s), if any, of joint seat allocation. The three options are discussed below:

From the above three options of accepting the seats, the candidates who choose the float or slide option, allocation of a seat in an academic program of his/her higher preference would automatically result in the forfeiture of the seat accepted by the candidate in the earlier round.

JoSAA seat allotment statistics and Opening and Closing rank for Round 1 has been released. Candidates can get to know about the details related to the opening and closing rank by clicking on the link mentioned here. 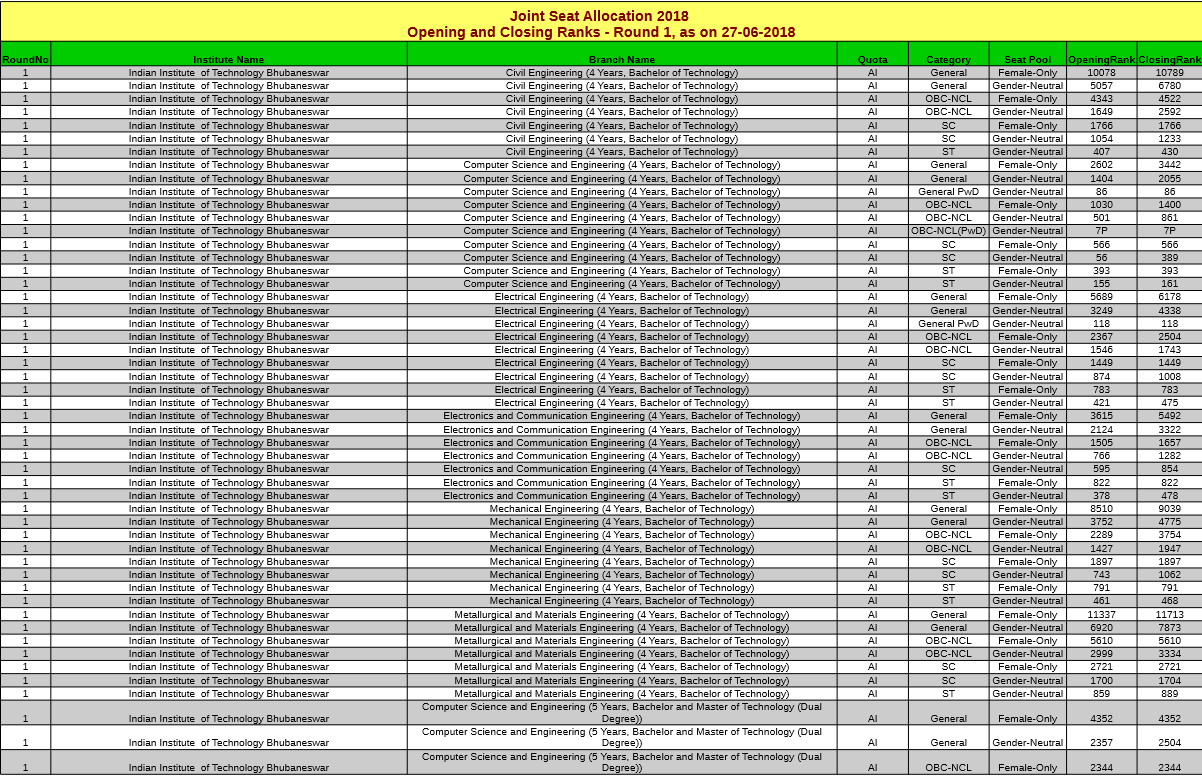 JoSAA Vacant Seats after Round 1 Allotment

It is to be noted that only those candidates who are allotted seats first time in Round 3 and those who have to do dual reporting must report at the respective reporting centres and accept the seats.

Payment of JoSAA Seat Allotment Round 2

The New reporting centre's list for the IITs, NITs, IIITs and Other GFTIs is given below. The list for the current year i.e for 2018 has been released. Candidate can click on the provided link to check the list of reporting institute 2018.

Candidates can go through the new reporting Centers released by the officials for the benefit of the candidates.

To allocate seats in NITs and Other GFTIs, candidates are assigned a state code of eligibility. Now the question arises. The same has been discussed in Question Answer as well as tabular form

Q) What is State code of eligibility?

A) State Code of Eligibility means the code of the state from where the candidate has passed his/her Class 12 or equivalent examination by virtue of which he/she has become eligible to appear in JEE Main 2018.

The total Intake for every academic program in every institution is divided into several categories namely: OPEN, OBC-NCL, SC, ST, OPEN-PwD, OBC-NCL-PwD, SC-PwD and ST-PwD.

Seat Division of  NITs and the Birla Institute of Technology Mesra 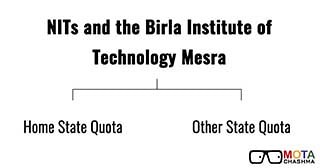 Seat Division of  Other GFTI's (BIT Mesra is an Exception) 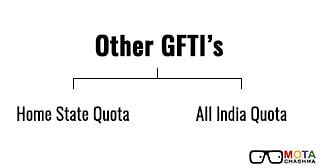 Home State quota is applicable to those candidates only whose Home State, as determined by the State Code of Eligibility, is same as the state in which the institute is located.

It is to be noted that candidates whose Home State is Andhra Pradesh, the Andhra Pradesh Quota in NIT Warangal is similar to home state quota.

Details about the Union Territories where there is no NIT’s

In the regions where there is no NIT, Home State quota will be applicable in the NITs shown below:

In case of supernumerary seats for the Union Territories of Andaman & Nicobar Islands, Dadra & Nagar Haveli, Daman & Diu, and Lakshadweep islands will be in the NITs shown below:

Sequence in which Seat Categories are considered for Allotment

Following are the rules that will be considered for seat allocation. The candidates are advised to go through the rules given below.

As per this rule, if under a particular seat category for an academic program

IIT Bombay is the top choice of students for pursuing B.Tech followed by IIT Delhi and Madras. CSE was the most popular course choice at IIT Bombay followed by Electrical, Mechanical and Civil Engineering.

For any queries related to JoSAA Seat Allotment 2018, you can write to us in the comment section below.