Indian Navy SSC Executive and Education Branch 2018 applications are invited for unmarried eligible male/ female candidates for grant of Short Service Commission (SSC) in the field of Education and Logistics (The application process for Law and IT is yet to start). The unmarried man and women can apply for Short Service Commission (SSC) officer in the executive branch of Logistics & Law Cadres. In the branch of Information Technology and Education, only unmarried men can apply. The candidates must fulfil conditions of nationality as laid down by the Government of India. The application process for Indian Navy SSC Executive and Education Branch 2018 has begun from 20 January 2018. The last date to fill the form is 10 February 2018.

The eligible unmarried men will be selected as Short Service Commission (SSC) officer for information technology and Permanent commission officers in education branch for course commencing January 2019 which will be conducted at Indian Naval Academy (INA) Ezhimala, Kerala.

Latest Update: Indian Navy has started the application for the field of Education and Logistics only. The candidates can fill the form through online mode.

Indian Navy has released the notification regarding the Education and Logistics field. However, the details of the Law and IT is yet to be released. The eligibility criteria for Education & Logistics and Law & IT is given separately below. Before filling up the application form, the candidates are suggested to go through the eligibility requirements.

Age/ Gender: The age criteria is different and depends on the branch/ cadre. The table pertaining the details regarding the Branch and age requirement is given in the table below:

NOTE: The minimum percentage for above should be 60%

Note: Candidates must have completed their degree on the date of filing the application, its mandatory

Note: The candidates should not be colour or night blind. 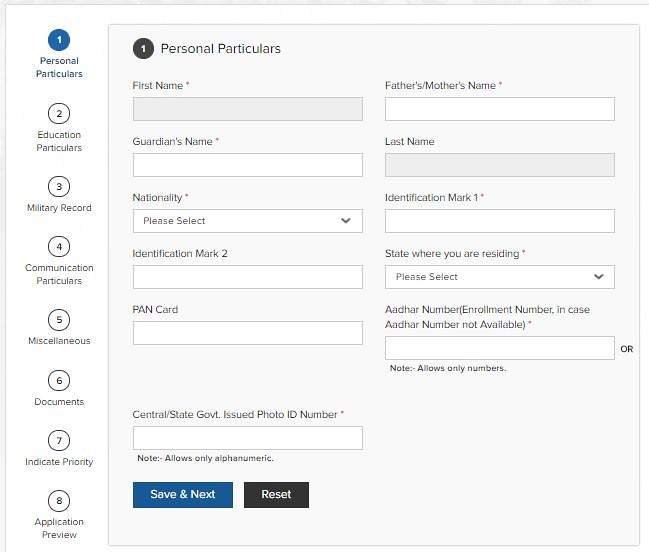 Documents are required to be submitted/ uploaded

Candidates for Indian Navy SSC Executive and Education Branch will be selected on the basis of marks obtained in BE/ B.Tech. IHQ of MoD reserves the right to shortlist applications and to fix cut off. Shortlisted candidates will be informed about their selection for SSB interview on their e-mail or through SMS (provided by candidates in their application form).

The total duration of SSB interviews is five days consisting of two Stages. The duration of stage 1 is One Day and stage 2 is Four days. Both stages of the interview are described below:

Stage 1: The stage 1 test consisting of Intelligence Test, Picture Perception and Discussion test will be conducted on the first day of arrival at SSB. Candidates who fail to qualify for Stage 1 will be routed back on the same day.

Stage 2: The stage 2 test comprises of Psychological testing, Group testing and Interview will last for 04 days. Successful candidates will thereafter undergo Medical Examination. The duration of stage 2 test is approx. 3 to 5 days.

Candidates recommended by the SSB and declared medically fit will be appointed for training as per All India Merit of SSB marks depending on the number of vacancies. Candidates have to carry the printout of filled application form along with the original certificates/ documents while appearing for SSB Interview.