NEET Analysis 2018 by Experts at Aakash Institute – On 6 May, CBSE successfully conducted NEET 2018 in 136 cities across India. After the conclusion of the test, Mota Chashma had a word with the experts of Aakash Institute, regarding NEET analysis 2018. As per the experts of Aakash Institute, the paper was tough and balanced, however, there were two controversial questions in the Chemistry section. Around 93,000 students from the institute appeared for NEET 2018. The question booklet contained 180 Multiple Choice Questions (MCQs) and each correct answer carried 4 marks. NEET result 2018 is scheduled to be announced on 5 June. As per the official notification, the minimum NEET cut off marks, which is scheduled to be announced along with the result, is 50 percentile for the General category candidates. Only the candidates obtaining the minimum NEET cutoff percentile will be awarded All India Ranks. Go through this interview to know more about NEET Expert Analysis 2018 by Akash Institute. 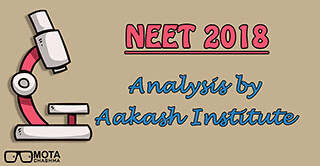 NEET Analysis 2018 by Experts at Aakash Institute – Paper was difficult

Mota Chashma
– Please share your overall analysis of NEET 2018. Also, which section was the toughest of all?

Aakash Institute - The overall paper was a balanced paper. Most questions were based on NCERT directly with a few questions requiring higher order thinking, especially in Biology & Physics.

There were 2 questions in Chemistry which were controversial – one each from Organic and Inorganic Chemistry. Students who would have revised NCERT thoroughly and would have done ample practice for NEET questions would have fared well today. 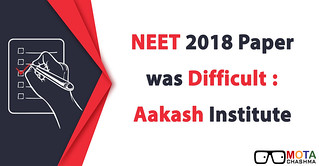 Mota Chashma – Can you elaborate the reasons why a particular section in NEET 2018 was the toughest?

Aakash Institute – We cannot say that any of the section was tough. Questions had a reasonable mix of factual, theoretical and numerical questions. Biology this year had few out of ordinary conceptual questions, similar to Physics. The attempt of these will define the top rankers.

Mota Chashma – How Class 11th and 12th syllabuses were effective this year?

Aakash Institute - There was healthy participation from both class 11&12 syllabus. However, this year class 11 syllabus or concepts questions were slightly more in number.

The pattern of the NEET-2018 is same as that introduced in the NEET last year. Overall the Question paper is on the lines of CBSE - NEET prescribed pattern, which has been conducted on 6th May. This year children, who were well versed with NCERT, must have performed well in the NEET exam.

Mota Chashma – How different was NEET 2018 from the previous year? Were there any differences in the sections?

Aakash Institute - NEET 2018 was absolutely in lines with the previous year’s exam. There were no changes in pattern, question type surprises or additions this time.

However, in Physics, there was a good combination of conceptual and numerical questions. Approximately 80% and 20% (respectively) is different from the previous years’ pattern.

In Biology, most of the questions were based on the statements given in NCERT but some questions were deviating from NCERT. The number of questions from Class 11 were comparatively more than that of Class XII. If a student had read the NCERT well, he/she must have fared well in the NEET exam. The paper was an assemblage of easy, average and difficult questions. A few questions required analytical approach. Overall the biology question paper was on the expected lines.

Most of the paper was NCERT based. There were both types of questions theoretical and numerical. Nearly 80% part of paper was numerical which is in sync with the usual pattern of Physics. Some questions had long calculations. Number of questions from 11th and 12th part were almost equal 21 and 24 respectively. Some theoretical questions were difficult. As expected majority questions were from rotational motion current electricity, Ray and wave optics.

Mota Chashma – How many students from your institute appeared for NEET exam 2018?

Aakash Institute - There were around 93,000 students from Aakash who appeared for the exam. 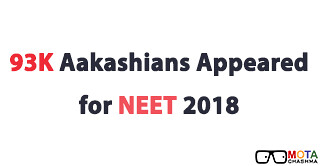 Mota Chashma – This year, an additional 2 lakh candidates applied for NEET as compared to last year. Will this make any impact in NEET Cut off scores?

Aakash Institute - Last year, the cut-off was 50th percentile which was at 131 marks for General category. This year, the paper was difficult and the number of students appeared was higher but overall it is expected to be similar as of last year.

Candidates obtaining the minimum NEET cut off marks will qualify the test. However, qualifying the test does not guarantee a medical seat at any college. The NEET cutoff percentile will vary with the category of the candidates. Check the table below to know more about NEET 2018 cutoff.