NEET 2018 Topper Interview - “There are no secrets to success. It is the result of preparation, hard work and learning from failure.” This quote by Colin Powell truly personifies the hard work of 17-years-old Barmer, Rajasthan boy, Prince Chaudhary. NEET 2018 result has been announced on 4 June bringing pride and joy for Prince Chaudhary and family. He secured All India Rank (AIR) 5 by obtaining 686 marks out of 720. The team of Mota Chashma had an interview of NEET topper Prince Chaudhary regarding his success mantra, preparation strategies/tips, hobbies, personal life and his future plans. The excerpts of NEET 2018 Topper Interview Prince Chaudhary is mentioned below. 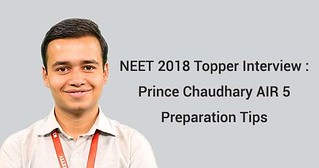 Mota Chashma: First of all, Congratulations! For scoring AIR 5 in NEET 2018. What was your reaction when you get to know your NEET rank?

Prince Chaudhary: I was really happy. I expected to be in top 10. Being the AIR 5 rank holder is a big thing for the person and the family of course.

Mota Chashma: Please tell us something about your family, hometown and schooling.

If I talk about my family, I have a younger sister, Simran who studies in class 8. My father Ramaramji Chaudhary is the owner of the medical store and mother Kamala Devi is a housewife.

Mota Chashma: What are your overall and sectional-wise marks in NEET 2018?

Mota Chashma: When did you start preparing for NEET 2018? Please tell about your preparation strategy and daily routine for NEET 2018?

Prince Chaudhary: I started my coaching for NEET from May 2016. I used to study at least 6 hours a day, regularly or 8-9 hours sometimes. I have fixed my timetable for preparations. I used to focus on the study materials provided by Allen Kota. Beyond that, I have not done any special efforts.

Mota Chashma: According to you, how was the difficulty level of NEET 2018? Which was the toughest and the easiest section in NEET 2018?

Prince Chaudhary: I have not analyzed the paper section-wise. But for me, overall the difficulty level of the paper was in between the paper of 2016 and 2017. Thus, if I need to say, the paper was moderate for me.

However, some questions in Biology were tricky and confusing for me. Rest the Physics was moderate since I made mistakes in 2 of the questions.

Mota Chashma: Was there any difference in the preparation strategy in the last months of NEET, as Board exam were also during that period. How did you manage to prepare for NEET 2018 and Board exams at the same time?

Prince Chaudhary: First of all, Allen used to help us in preparing for Board as well. In December and January, the classes were arranged in Allen. The important points or notes were taught by teachers of Allen. We used to study through notes only. The faculty members used to tell us the important questions/sections for class 12. And most importantly, I prepared myself through NCERT books.

Mota Chashma: Did you take any coaching? Do you think coaching institutes help you for better preparation in NEET 2018?

Prince Chaudhary: Yes, in my case, it helped me a lot. I took coaching from Allen Kota. A candidate preparing for NEET from school may not do that well, which a candidate can do with the help of coaching. The regular paper based on NEET exam pattern helps a lot. And the competition which a candidate faces in coaching may not find that environment in school. The entire syllabus taught in coaching is based on NEET concepts.

Mota Chashma: How extensively did you practice from Mock Test and Sample Papers? Do you think practising from the mock test and practice papers helps and how?

Mota Chashma: Are there any special books which you think have helped with your preparations? Are school textbooks adequate for preparing for NEET?

Prince Chaudhary: I usually used to prefer the study material provided by Allen Kota. But for Organic, book by M.S.Chauhan, which my teacher recommended for good preparation and clearing my doubts. I would suggest making your NCERT concepts clear to move further.

Mota Chashma: Why do you want to study medicine? Which college would you like to prefer?

Prince Chaudhary: I love studying Biology and Mathematics. This is the only reason I choose to study medicine. I have also appeared in AIIMS MBBS 2018. So I would like to go for AIIMS, New Delhi.

Mota Chashma: What do you think are the key factors behind your success?

Prince Chaudhary: I would say that never postpone your work. Whatever you have studied in school or coaching, you must revise it thoroughly on that day itself. Doing this will make your concept more clear. It will also reduce your workload at the last moment of preparation.

Mota Chashma: How did you de-stress yourself during your preparation? What are your hobbies? How often can you pursue them?

Prince Chaudhary: I love reading comics for refreshing my mind. I also like listening music of any genre depending on my mood.

Mota Chashma: You know! You are an inspiration to thousands of students who will sit for NEET. What is your message to all future NEET aspirants?

Prince Chaudhary: I would like to advise that do work on time management. Once you can handle your time management, NEET will be easy for you. The paper is not so tough for any prepared student, but time-management is the only problem that every student has to deal with. For that, you can carry some NEET previous year question paper and solve it at home within the time limit.