How to Join Merchant Navy Courses after Class 12

About Merchant Navy: Merchant Navy is a fleet of ships which are basically transport agents from place to place or country to country. They are non-combatant ships and their major purpose is to carry heavy goods in bulk from one country to another. Merchant Navy ships are mostly container ships but also sometimes act as passenger ships. 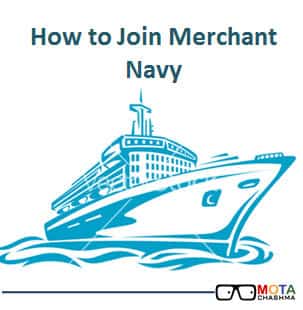 How to get into Merchant Navy Courses

There are three modes through which an aspirant can join Merchant Navy:

Through IMU CET
- After Class 12 (Complete Details about IMUCET)

List of all Entrance Exams & Colleges for Marine Courses

Following completion of any of these courses, one can apply to shipping companies for various jobs in Merchant Navy.

Earlier, there were seven government maritime Training and Research Institutes which used to conduct their own entrance tests but are now merged with IMU, These include:

Life as a mariner is not easy, although the remuneration is high.

*The salary is tax-free only if the sailor spends 183 days in international waters in a year. Else, the salary is taxable under laws of Govt. of India.

Upon completion of term/ or upon voluntary retirement from the merchant navy, one can look for the following prospects as a form of career.