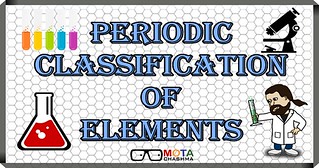 The Classification means identifying similar species and grouping them together. These groups are defined as metals, metalloids, nonmetals, and inert gases etc.

Here is the Periodic table of elements. 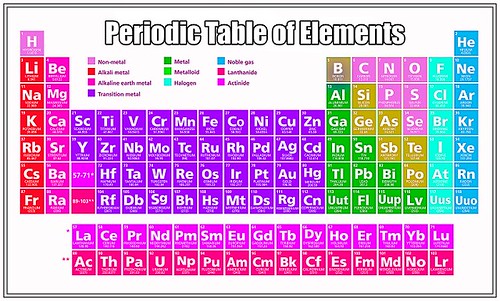 However, there are some drawbacks of Dobereiner’s triads as well. Such drawbacks are like he could identify only a few triads so the law could not gain importance. In the triad of Fe, Co, and Ni, all the three elements have a nearly equal atomic mass and thus it doesn’t follow the above law.

According to the Newlands law of Octaves, the elements are arranged in such way that the eight elements starting from a given one has the properties which are the repetition of those of the first if arranged in the increasing order of the atomic weight. It is like the eight note of music scale.

Drawbacks of Newland Law of Octaves

The drawbacks of Newland Law of Octaves are: 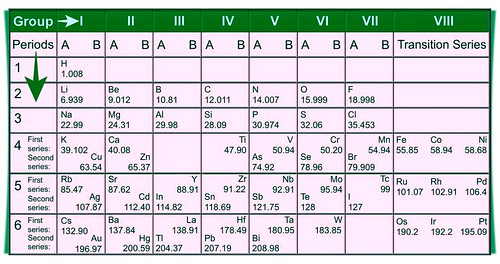 Mendeleev’s periodic table was found to be consistent with the observations made about the physical as well as chemical properties of the elements.

Mendeleev left some gaps in his Periodic Table in order to recognize the existence of some elements that had not been discovered. For example, gallium, scandium, and germanium were discovered later and they have properties similar to Eka - Boron, Eka – Aluminum, and Eka - Silicon, respectively. The properties of Eka - Aluminum and Gallium are given in the table below:

Henry Moseley proposed the modern periodic table. According to that table, the physical and chemical properties of the elements are the periodic function of their atomic number. He also showed that the atomic number of the element has the more fundamental properties than its atomic mass. In the modern periodic table, there are 18 vertical columns that are groups and 7 horizontal rows that are called periods.

The trends observed in some important properties of the elements in moving down the group and in moving from left to right are given below:

Valency - The Valency can be defined as the combining capacity of the atom of an element in order to get the stable configuration.  Like 8 electrons in valence shell and in some cases, there are 2 electrons. If we see from top to bottom in the group, the one shell keeps on getting added from one element to another.

Atomic Size - The atomic size refers to the distance between the centre of the nucleus of the isolated atom to its outermost shell which contains electrons. The atomic radius decreases while moving from left to right along a period. In a group, the atomic size decreases from top to bottom because of the increase in the number of shells.

Q - 1. Do Dobereiner’s triads also exist in the columns of Newland’s Octaves? Compare and find out.

Q - 2. An element has electronic configuration 2, 8 and 3. What is the atomic number of this element? To which to which (1) group and (2) period this element belongs?

Q - 3. An element placed in the second group and third period of the of the periodic table burns in the presence of oxygen to form a basic oxide.

Q - 4. Atomic numbers of a few elements are given below:

(3)    Identify the periods of these elements in the periodic table

(5)    Determine the valency of these elements

Q - 5. What are the drawbacks of Newland’s Law of Octaves?

Ans. The drawbacks of Newland’s Law are:

Q - 6. What are the drawbacks of Dobereiner’s Classification?

Ans. The drawbacks of Dobereiner’s Classification are:

Q - 7. Name three elements that have a single electron in their outermost shell.

Q - 8. Name 2 elements that have 2 electrons in their outermost shell.

Q - 9. Name 3 elements that have a single electron in their outermost shell

Q - 10. Which element has two shells with the filled outermost shell?

In the case of any query related to Periodic Classification of Elements Class 10, write to us in the comment section below.