JEE Main 2018 Student Reactions - Candidates can check JEE Main student reactions of Paper 1 and Paper 2 here. JEE Main offline entrance examination for Paper 1 has been conducted on 8 April 2018 from 09:30 am to 12:30 pm. Around 9.25 lakh aspirants appeared for the entrance test. Some students who appeared in JEE Main 2018 shared their reaction with the team of Motachashma on the examination. JEE Main reactions by student tell the analysis of the JEE Main paper, difficulty level, subject-wise reaction and more. For most of the test takers, JEE Main overall Paper 1 was tough and lengthy. From three of the sections, Physics was toughest, while Chemistry was the easiest section and Mathematics was moderate. Aspirants appearing for JEE Main Paper 1 to be conducted on 15 & 16 April 2018 in CBT mode can go through JEE Main 2018 student reactions from this page.

At the beginning of the paper, boys were asked to remove their belts, socks, and shoes, whereas, the girls had to remove their shoes and bangles. With the process of removing the belts, candidates were unsatisfied and bit upset with the arrangements done at the exam centre.

Initially, some of the parents and students were confused about the reporting time at the test centres, need of carrying identity proof etc. However, none of such complaints was reported later

According to most of the students:

A majority of students found Physics Section difficult, while Chemistry and Mathematics as easier ones. Whereas, other majorities of candidates said Mathematics was the toughest and lengthy.

One of the Quora users, Vivek Varma said that “In Chemistry, some of the questions were quite direct while others were tricky. Mathematics was tough initially but it was a bit easier than last year. I attempted 20 questions. Physics was surprisingly better for me and was same as it was for last year.”

Manan Joshi on Twitter said that “Paper very tough overall. He started with Mathematics which took 1.5 hours to attempt 19 questions. Physics was very easy for him. According to him, time management is must to score well.” 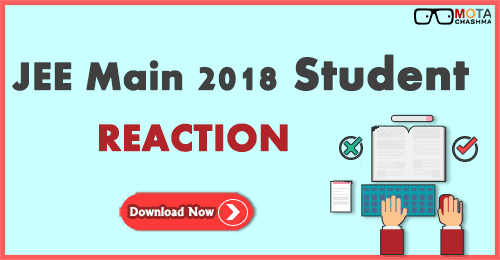 Dhiraj Kolhe said on Quora that, “JEE Main paper was the toughest in comparison to previous 5-6 years, as I have solved all of them. Physics was the easiest. I am weak in Mathematics, so eventually, it is tough for me. However, Chemistry is my forte; it was still tough for me. I am expecting at most 150 marks in JEE Main.”

Another JEE aspirant Rishendra Pratap Singh appeared for the test, he said, “Mathematics was quite good, Physics was above normal as usual and Chemistry (especially Physical Chemistry) was a bit tricky.”

Shubham Verma was unsatisfied with JEE Main 2018 paper. He said, “This was the worst JEE Main ever. Chemistry and Mathematics were the easiest one for me, however, lengthy as well. Physics was the most difficult section.”

So, JEE Main 2018 concluded as a tough paper for the student. Candidates appearing for JEE Main computer based Exam for Paper 1 on April 15 & 16 must better be well prepared.

Majority of the students coming out of the examination centre said that questions from Mathematics section were bit tough.

A JEE aspirant, Raman Sharma said, “The maths part of the question paper was bit tough. Actually the questions were not difficult but were tricky. If students knew the trick they could solve the questions.” He added, “The general knowledge part of Aptitude was quite good, but mathematics section was toughest of all.”

Neha Bhardwaj said, “Though the maths part of the exam was difficult, but the aptitude part of the paper was not easy either. Drawing paper was lengthy; it consumed my most of the time. Overall I am satisfied with my performance and hoping for good result.”

In case of any query regarding JEE Main 2018 Student Reactions, you can write to us in the comment section below.