The Secondary Board Examination Assam (SEBA) has announced the much-awaited SEBA 10th Result 2018 today on 25 May 2018 at 9 a.m. The Assam HSLC Result 2018 has been released online. Out of 175976 who appeared for the exam, only 95813 passed, while 31562 got the first division. The overall pass percentage stood at 54.44%, which is approximately 7.50% more than last year's 47.94%. Reversing the national-wide trend, the boys have outperformed the girls once again in SEBA 10th Result this year. The Assam HSLC Exam was held by the SEBA from 23 February to 22 March 2018. According to a reliable source, both the SEBA exam and Assam Higher Secondary Examination (AHSEC) were held in 850 exam centres all over the state. Raktim Bhuyan with 593 stood first, while Abinash Kalita and Preetpal Bezbaruah with 592 marks got the second position. The third place was secured by Sultana Ayishah Siddique, Nintee Devi and Arbi Chaliha with 591 marks. This year, the Assam Board has released the Assam HSLC Result 5 days earlier than last year. In the year 2017, the SEBA Result was declared on 31 May 2018, in which around 391,000 students appeared for the exam and 47.94% students passed it.  The AHSEC Result 2018 will be announced on 31 May 2018. The students should read this article to know the steps to check the Assam HSLC Result 2018, result at a glance and statistical analysis.

The following are the steps to download the Assam HSLC Result 2018: 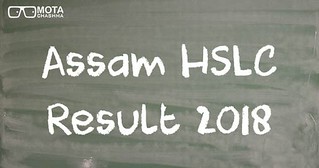 The following table would help the students to have SEBA Result 2018 highlights:

The following table shows the overall, as well as gender-wise pass percentage and the total number of students appeared for the last 5 years. The table reveals that the overall pass percentage increased marginally in the years 2015 and 2016, but dipped drastically 15% in 2017, which happened due to a drastic decline in the pass percentage of the boys in 2017. Following the national wide trend, the girls have fared better than the boys throughout the period. After some rise in the total no. of students appeared in the exam in 2015, the numbers started falling afterward.

For all the latest updates on 10th Result 2018, stay in touch with motachashma.com