TALLENTEX 2018 is a National Level Talent Exam for students of class 5 to 10 & 11 (Science) launched by ALLEN Career Institute. ALLEN'S directors Sh. Rajesh Maheshwari, Sh Naveen Maheshwari and other senior officials announced TALLENTEX Schedule, Logo and Booklet. This year, TALLENTEX will be conducted on three separate dates viz are; 10 September 2017 (only for Mumbai), 8 October 2017, and 15 October 2017. Students can register online at www.tallentex.com & offline forms available at all ALLEN Centers. 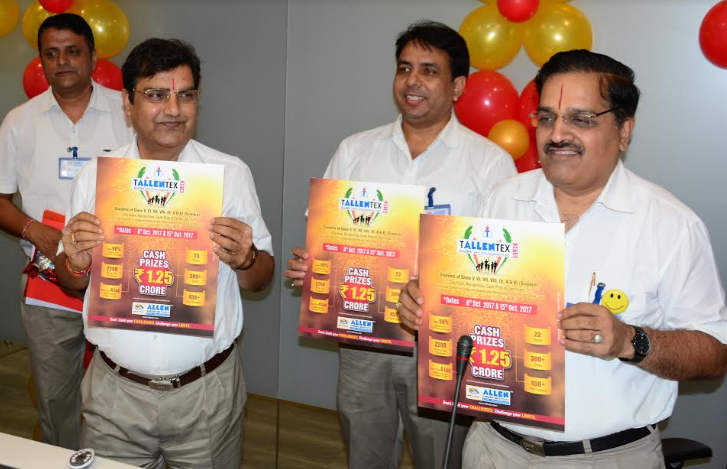 About ALLEN Career Institute - In last 29 years ALLEN has mentored 6.5 Lac students on the path to success. ALLEN became the only institute in India to produce All India Ranks 1,2,3 in both IIT-JEE and NEET Examination last year. This outstanding track record of ALLEN and benchmarking system of Testing & analyzing the diverse student group from across the country makes it a uniquely powerful institute to provide a high-value platform to students for improving their talent. TALLENTEX focuses on the latest examination technology and test patterns. It is one of the biggest platforms for the students, to interact with other best brains of the nation.

TALLENTEX 2018 question paper will have objective type questions. There will be 80 Objective Questions /MCQs from Physics, Chemistry, Maths, Biology and Mental Ability. Every correct answer will fetch +4 marks and -1 mark for each wrong answer. There will be no negative marking for classes 5 to 7.

The meritorious students in TALLENTEX 2018 will be given cash rewards of Rs 1.25 Crore, in addition to this, the selected students will also be given scholarships up to 90% in academic session 2017-18 in classroom courses at ALLEN.

In addition to the cash awards and scholarships, there are many other rewards of appearing in TALLENTEX 2017 some of them include;

All participating students in TALLENTEX 2018 are given Competitive Success Index (CSI) based on their performance in the Exam. Through CSI, students can analyze his/her potential of success in competitive exams such as IIT-JEE, NEET, KVPY, NTSE and Olympiads.

Top 20 students in TALLENTEX 2018 from all classes will be called for Success Power Session at Kota. In this one day, session Expert mentors will guide students for achieving success in various competitive exams as well as all the toppers will be felicitated with their cash rewards, medals and certificates. Rewards of remaining rank holders will be sent by post. All cash rewards will be directly given and there is no compulsion for students to take admission in ALLEN.