ICSE and ISC 2017 Exams to be Rescheduled

ICSE and ISC board exams to be rescheduled due to assembly elections. CISCE Board has decided to reschedule ICSE and ISC exams as the date clashes with assembly elections in Five States namely Uttar Pradesh, Punjab, Uttarakhand, Manipur and Goa. The CISCE has earlier planned to hold ISC  exams for the year 2017 from 6 February 2017 and the Indian Certificate of Secondary Education (ICSE) Examination from 27 February 2017.

CISCE Chief Executive Gerry Arathoon said that the examinations will be rescheduled, he also emphasised that no dates have been finalised yet. The revised dates sheet for both Class 10 and 12 will be announced within 10 days. On Wednesday, the election commission announced that the assembly elections in the politically crucial northern state will be conducted in seven phases starting 11 February 2017. 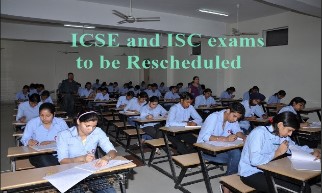 The Central Board of Secondary Education (CBSE) too will account for the election dates and was working to release a schedule that does not clash with the polling.

ICSE and ISC Exam dates that clashed with Polls

Following exams dates are clashing with phase 1 and phase 2 poles: